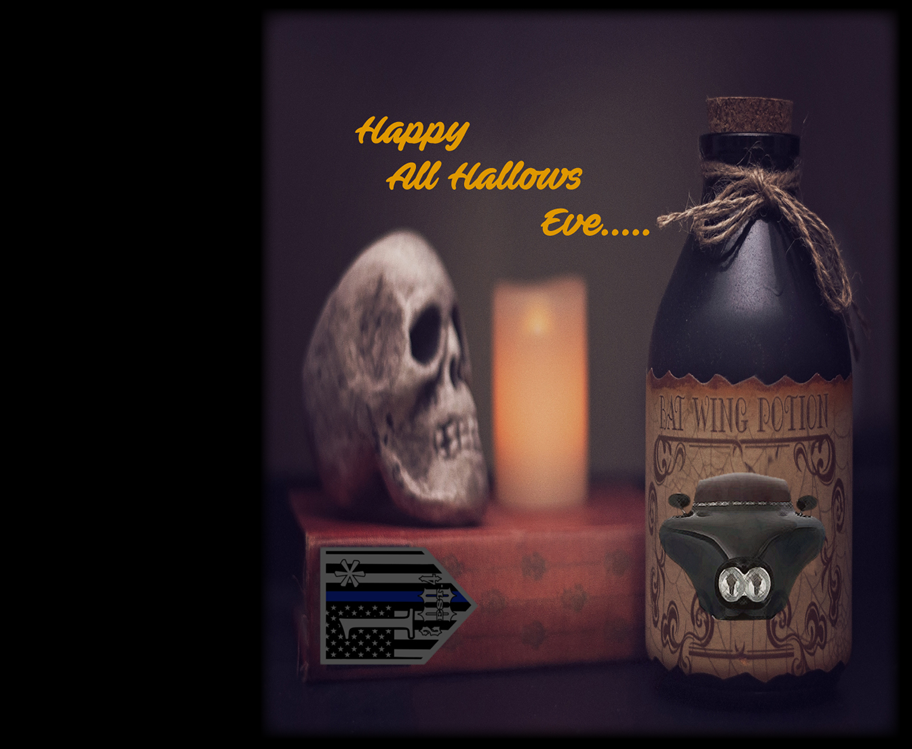 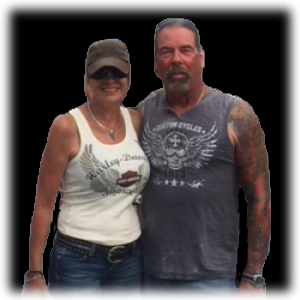 I was born and raised in New York on Long Island. I spent fourteen and a half years in The United States Marine Corps, I left the Marine Corps as a Captain settling in Florida, where I began working for the Naples Police Department in 1990 and helped create the Departments' first SWAT team. I retired from the Naples Police Department in 2005 and took a position as a Special Agent for The Florida Department of Law Enforcement. I spent three years as a member of the FDLE's Special Operations Team (SWAT).On June 1st, 2017, I retired from FDLE.
I am a founding member of the Defenders MC and ride a Harley Davidson Motorcycle. 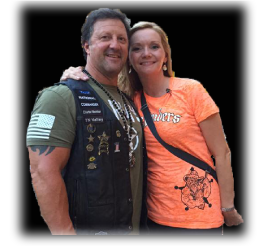 I was born and raised in Rockwood, TN.  I joined the US Army in 1983, and was stationed at Fort Benning, GA where I completed Infantry and Airborne School. I spent my last 18 months on the DMZ at Camp Casey, Korea.  After I was Honorably Discharged from the Army, I attended Roane State Community College and completed my Associate degree in Criminal Justice.

In November of 1988, I started working as a DOE Security Police Officer.  In 1996, I was laid off and went to work for the Harriman Police Department as a patrolman until I was recalled by DOE in 1998. I remained a part-time officer with Harriman and then moved to the Roane County Sheriff Office as a deputy in 2006. Once I returned to DOE, I became a member of the Special Response Team (SRT) and have been serving on SRT for the last 15+ years. The last 2 years, I have served as a SRT Sergeant and am currently assigned to the Mobile Training Team as a SRT Instructor.

I joined the Defenders in 2008 as the Sgt-At-Arms with the Knoxville chapter. I started the TN Valley chapter in 2010 as President. My beautiful wife, JuJu, joined with me in 2008 as an Associate and is very active in the club. She was a very big part of TN Valley’s success in putting on the National Rallies in 2011 & 2013. 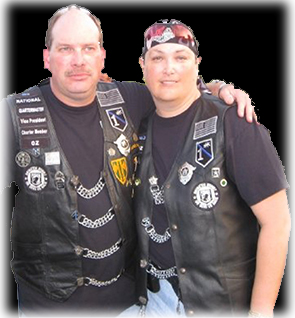 I was born and raised in Ohio and joined the Army in 1988 where my first assignment was to Germany during the end of the “Cold War” and the Berlin Wall coming down, I was also stationed at Fort Campbell. I retired with 20 years of service. I’ve worked with the Belmont County Sheriff’s Office in Ohio and I’m currently with the Johnson County Sheriff’s Office in Kansas.
I met my wife Anne “Storm” Adams in 1996, married in 1998 and had a ready made family with 2 daughters and a son. I now have 6 grandchildren with the oldest Gage ‘Bumblebee” Brewer being an Apprentice with the OZ chapter.
I joined the Defenders in September 2008 as a Charter Member and VP of the Oz Chapter. I became the National Quartermaster in 2009 and then National Secretary in 2012. I ride a 2017 HD Ultra CVO. 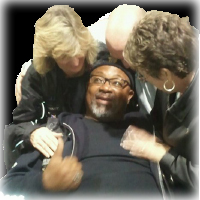 I was born and raised in Texas. Left Houston and made the move to Ft Myers in 1986. When I arrived in Ft Myers I worked for the telephone company. Left the telephone company and went to work for The Newspress. While working at the Newspress, I went to school to get my EMT license. I went to work for Lee County EMS. I worked 10 years for EMS and retired to go to work in the building supply industry.

I met and married my wife (Judy) in 1988. When I got married I had a ready made family with 3 kids. Our daughter is the oldest and 2 sons. All the kids are out and on their own. And now we have 2 grandkids. I'm (1) lucky grampa.

I joined the Defenders in 2005. I held a road guard position and the position of Commander of the Lee County Chapter. I love being a part of The Defender Family. I ride a geezer glide Harley Davidson Ultra Classic. 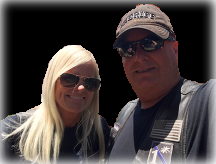 I was born in Maine into a Navy family. My folks moved a few times until we settled outside of Washington DC where I enjoyed growing up on a farm raising horses and cattle. I began attended college in Ohio and eventually moved to Florida where I finished my BA Degree in Criminal Justice. I joined the Hillsborough County Sheriffs Office in 1981 while attending school and was hired full time in 1984. I have a diverse background with stints in Patrol, Field Training, and Traffic Homicide. In addition I dedicated many years to the Canine Section and successful deployed 5 four legged partners. I am currently a Lieutenant and Dayshift Commander in Patrol. As a supervisor I managed a 120 man Special Incident Response Team, the Tactical Services Unit comprised of SWAT operators and oversaw the Gang Enforcement Section, Vice Section, Warrants Section, Civil Section and spent time assigned to the HCSO Legal Section overseeing a group of detectives.
I am supported by my wife Michelle aka “Spitfire” who has continued to standby me for the last 25 years. I have two wonderful boys. One is a Deputy Sheriff working at HCSO and the other is a Junior in college. I also have a handsome grandson so I am blessed. Both Michelle and I are life members in the Club. I joined in September 2007. I have held the positions of Commander, Treasurer and Vice President in the Tampa Bay Chapter. I am the newest member of the National Board.
I currently ride a 2018 Harley Davidson Road Glide Ultra. Why do I own one? “Because nothing rides like a Glide!” 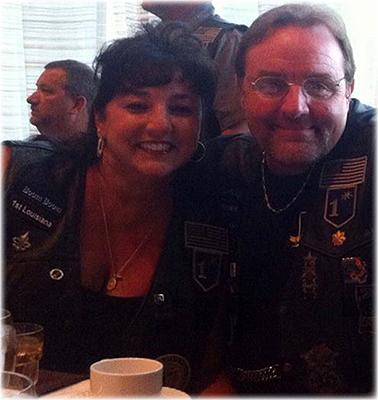 Robert Murphy started his law enforcement career in 1978 with the Grant Parish Sheriff’s Office and in 1984 began working for the Rapides Parish Sheriff’s Office till he began working as a Trooper with the Louisiana State Police. Robert spent 30 years with LSP and retired in July 2019.  He has been married to Belinda Murphy for the last 15 years, who is also a Lieutenant with Louisiana State Police.  They have 3 children and live in Dry Prong, Louisiana.  Robert is a Charter Member of the First Louisiana Chapter where he served as Commander, Vice President and President until being elected to National Major.  He and Belinda are Defenders Life Members. 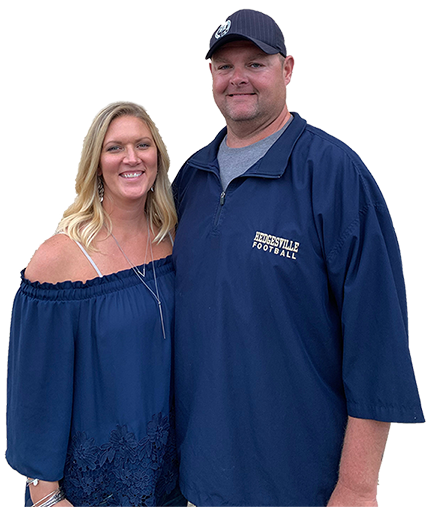 I was born and raised in Martinsburg, West Virginia.  Right after graduating from High School in 1996, I attended Marshall University.  I have worked in law enforcement for approximately twenty years.  I began my career working corrections at the Eastern Regional Jail in West Virginia.  I crossed over to law enforcement operations fifteen years ago and joined the Montgomery County Police Department in Maryland.   I am currently assigned to the Motor Unit where my primary duty besides patrol is to coordinate official escorts for the agency.  I am also a certified state instructor in Firearms, Emergency Vehicle Operations and Police Motor Operations.  I enjoy competing in Police Rodeos all across the country.   Currently I am a union shop steward through the Fraternal Order of Police and a representative for my agency.
I have always had a passion for riding motorcycles both on and off the job. I currently log more than 30,000 miles annually, at work and while riding with my Defender Brothers.  My work bike is a 2019 Harley Davidson Electra Glide Police Edition.  I personally own and ride a 2017 Indian Roadmaster.
I became a Brother in the Defenders LEMC in 2014.  Since joining I have held four Executive Board positions; Lieutenant at Arms, Major, Vice President and my last was President of the Mason Dixon Chapter.   In 2019, I was named the Defender Member of the Year.  I was also proud of the fact my better half and Associate, Kim “Short Bus” Cantley was named Associate of the Year.

I have two beautiful daughters, Olivia and Isabella, who are both Apprentice members in the Defenders.  I joined the Defenders because of my love of motorcycling and for the Brotherhood, which is something I have experienced in my Law Enforcement career.  This Brotherhood has meant more to me than I can fully express.  Simply put, the Defenders are a part of my Family.

A Brotherhood of One